I recently contributed the Set data structure to the Elixir programming language. The Set is implemented through a HashSet.

Elixir’s Set implementation is often faster than Erlangs own sets. Which is pretty impressive since Elixir runs on the same Erlang VM. It does this by adapting the internal data structure based on the size of the sets.

Lets explore how Elixir does this while also explaining a little about Elixir:

For small sets the internal representation uses an ordered set (which really is just a list).

We refer to this as a Bucket.

Being ordered allows us to perform faster access and modification.

For example finding a member of a set:

Order in the list is not maintained in the data structure but in the insertion/put:

Putting elements into a Bucket

Before we jump into some Elixir code its important to understand that the order of functions in Elixir is important. We start from the top function and if this function matches a criteria we call it otherwise we try the function below and so on. If we find no function that matches that’s a error and execution aborts.

Here is the Elixir code for inserting a member into a bucket.

Expanding into a Trie

Upon reaching a threshold the Set changes the internal representation into a Trie (What the hell is a trie).

For a Trie the time required for insert, delete and find operations is almost identical. As a result, for situations where code is inserting, deleting and finding in equal measure, tries can handily beat binary search trees.

In a Trie we don’t store any keys or hashes, instead a elements position in the tree defines the key with which it is associated.

Hence we can take advantage of Erlangs fast tuples to model the trie. A multi-depth trie is just tuples inside tuples.

Lets work through an example. For simplicity we will assume the expansion happens at the very small size of 5 elements:

Redistribute the bucket elements into the Tuple 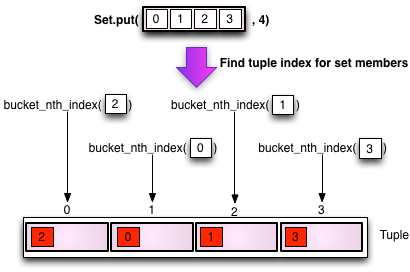 Finally add the new set member into the Trie

Notice while we have a more complicated data structure with a trie the leaves are always plain old buckets. Hence insertion with a trie is a case of finding the right bucket and then just reusing our bucket_put function. Beautiful and fast :)

Things get a little more complicated with multi depth tries. If you are interested digging more into the implementation you can see all the source code of HashSet on Github.

We can also remove elements from a set so in much the same as we expanded we have to contract the internal representation of the set. 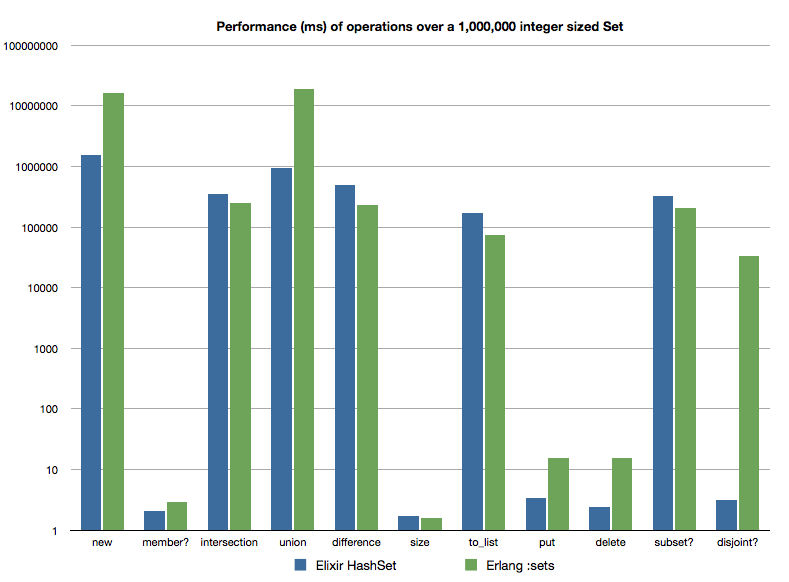 The benchmark scripts are on github (https://gist.github.com/josephwilk/5808525) if you are interested in running them yourself.