A simple goal, to directly connect Emacs to running hardware and software synthesisers with realtime control. Emacs as a musical instrument.

I already use code to control synths (as Repl-Electric) but there is a level of indirection between the code and the effect on the music. You push keys on your computer keyboard and nothing happens. Only when you run the code does the music change. I wanted to add realtime control to my performances while still remaining in code and Emacs. Bringing the performance closer to musical instruments were instant feedback is a core part of the performance experience.

I could use external hardware, like a MidiFighterTwister (https://www.midifighter.com/#Twister) or TouchOSC (https://hexler.net/software/touchosc) but I’ve found the context switch of moving between coding to twiddling dials on hardware expensive. The code is my composition process, so it makes sense for the direct control to also be there.

Doing crazy things with Emacs starts to open more doors in musical expression. Since we can control music hardware with Emacs, we can control the playhead position within a sample. Much like the needle of a record player.

First we need a client within Emacs which will send OSC (https://en.wikipedia.org/wiki/Open_Sound_Control) using UDP packets. There is thankfully already an Emacs package for this: osc: https://delysid.org/emacs/osc.html

A lot of musical hardware and software only supports midi. We are sending OSC 😕. Hence we need a quick way of converting our OSC message to a midi message. Why don’t you send midi from Emacs directly? It’s not a new thought (https://www.emacswiki.org/emacs/EmacsMidi), but I’ve seen no examples of getting it working. My answer here is path of least resistance, and I don’t feel like implementing the midi standard in Elisp.

It compiles into two binary servers:

We launch the o2m server in a shell which will be listening on port 4561 and will forward on OSC messages as midi.

Midi has a fixed argument format while OSC is very flexible. Hence this a little jiggery pokery in get the source OSC message mapping to the midi arguments.

For MIDI_HOST I’m using the Inter-application communication (IAC) driver on Mac. This registers IAC Bus 1 as a midi device. I’m also sending a control change message, shaping the parameters rather than triggering notes. This could be any of the supported midi messages (note_on, note_off, pitch_bend, poly_pressure, etc).

Example of OSC to midi message:

The channel 9 and control code 100 seem magical. I’m routing those to synths via Ableton Live.

Any DAW would support this or you could send direct to a synth and not use IAC. Your MIDI_HOST would be the name your midi device registers as.

We have the backend for sending live midi controls to hardware. Now we need some interface within Emacs to trigger it.

The design is based on the idea of dial encoders commonly found in music hardware. 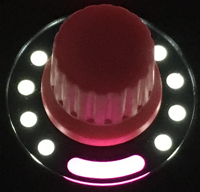 Our dials in code are float numbers. To turn our dials we borrow the idea from the Chrome inspector of scrolling through possible numeric values with the arrow keys.

In our case every increment/decrement will send a live message to our synths.

We need to extract from the active Emacs buffer the thing we are trying to control. Finding the:

Here comes a lot of Elisp and some hairy regexes.

Thingatpt (https://www.emacswiki.org/emacs/ThingAtPoint) which is part of the standard lib is extremely useful here.

We map our synth-and-param to the correct midi port and channel.

Finally the keybindings that trigger our instrument mode:

We are almost done. For fun I’ve added a visually aid to the position of the float encoder. Midi messages are generally limited to 0-127 values, so if we map that to 0-100% we can create a visual representation of the current setting.

Binding into a Performance

All this work was used in my recent performance:

“You Fall into Your Screen”: https://vimeo.com/replelectric/you-fall-into-your-screen

I’m using Emacs to simultaneous control Synths and Unity3D in much the same way discussed in this post. It feels pretty amazing to augment the performance with this live control.